The Town Where Everyone Talks About Death

Category: Newsletter | Comments Off on The Town Where Everyone Talks About Death
Posted April 5, 2019 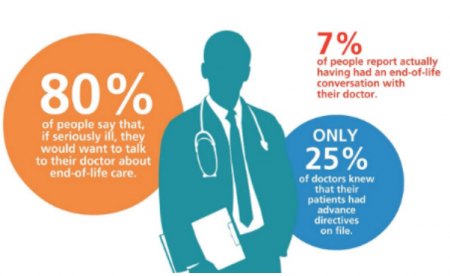 What would you say if I told you there was a town where 96% of adults who pass away had planned it out? This place exists, and it’s the beautiful town of La Crosse, WI. These folks have filled out an advance directive, outlining how they want to die. While it may sound morbid, it’s exactly the opposite!
In La Crosse, Wisconsin, you’re the odd man out if you don’t have a plan in place for your death. Nationally, only about 30 percent of adults have an advance directive or similar documents outlining a plan. In this community, talking about death is a comfortable conversation — in fact, most of the town gossip is neighbors talking about who on the block hasn’t filled out their advance directive just yet!
It’s become such a comfortable conversation basically because of one man in town. Bud Hammes works as a medical ethicist at a local hospital called Gundersen Health System. For years, he was called when someone’s dad had a stroke, was in a coma, on machines. Bud would sit down with the family and try to help them figure out what to do next. And every time, he says, the discussion was excruciating. Families were suffering, and the idea of “ending” a family members life without knowing what they want was causing even more distress.
Most of the time, he says, they’d be talking about a patient who had been sick for years. He couldn’t figure out why this conversation wasn’t being had earlier on! He started training nurses to ask people ahead of time, would you like to fill out an advanced directive. After a while, the idea caught on.
It turns out that if you allow patients to choose and direct their care, then often they choose a course that is much less expensive and less stressful for the family. In fact, La Crosse, Wisconsin spends less on health care for patients at the end of life than any other place in the country, according to the Dartmouth Health Atlas. While reducing costs wasn’t the reason they started, it is a happy accident. A staggering statistic shows that over 30% of healthcare spending is done in the last days of a patients life, waiting for decisions to be made.
Think about it – when most people are asked “would you like to be kept alive if you were braindead?”, many would quickly answer, “no!”. However, it’s a painful question to answer for your unconscious parent, spouse or sibling. Choosing your own end of life care now (even if you are still young and healthy!) eliminates distress, excess spending, and allows the family to focus on what’s important – spending precious moments with the ones you love.
If you don’t have an estate plan in place (including an advance directive), there’s no time like the present. We can help you put a wonderful plan into place now, so these questions don’t linger. Contact our office if you’d like to set up a consultation or update your current estate plan.