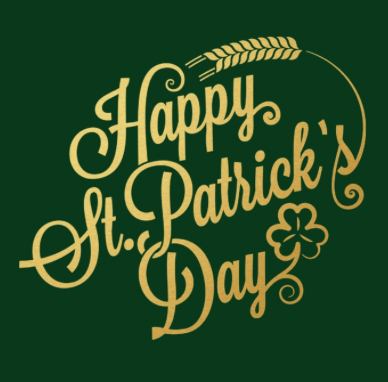 March 17th is St. Patrick’s Day, a public holiday in the Republic of Ireland, Northern Ireland, Newfoundland and Labrador. It is celebrated in more countries than any other national festival. St. Patrick’s Day is also a feast day on the liturgical calendar of the Catholic, Orthodox, Lutheran and Episcopal churches. St. Patrick is remembered for turning Ireland from druid led polytheism to Christianity.  Patrick (Irish – Padraig) has come to symbolize Irish heritage and identity. St. Patrick’s Day is a celebration of Ireland itself. Wearing of the green is a tradition based on St. Patrick’s use of the shamrock to illustrate the Holy Trinity of father, son and spirit.

By tradition, Patrick was born in Britain, kidnapped and taken to Ireland as a slave, escaped to Britain, became a priest, and returned to Ireland as a Christian missionary until his death. Patrick wrote the Declaration or Confession, a biographical account of his life and mission. Much of the Declaration concerns charges made against him at a trial. It appears he was accused of some sort of financial impropriety in receiving and distributing gifts but was found innocent.

Handling money that belongs to others is a privilege and responsibility. A “fiduciary” is anyone entrusted with property or power for the benefit of another.  The relationship is one of utmost trust and confidence. The fiduciary is obligated to act in the best interest of another. In our law firm, we work with fiduciaries every day, including executors, trustees, guardians, conservators, attorneys in fact, health care agents, escrow agents, financial advisors, accountants, officers and directors. We act as fiduciaries when we handle our clients’ money in our trust account. We also act as fiduciaries when our clients entrust their personal, private and confidential information to us.

I was in probate court recently during a hearing on the appointment of a conservator for an elderly person. The judge used the hearing as a teaching moment for the lawyers present, describing a case in which a conservator had helped himself to the ward’s money. It reminded me of another case many years ago.

We had represented a severely brain injured young man in a personal injury claim.  His parents were appointed conservators and the court ordered that the substantial personal injury settlement would be held and invested in a local savings and loan (remember those?) in a “restricted account” where no money would be withdrawn except with court approval. The conservators and savings and loan agreed to the restricted account arrangement. A few years later, the conservators convinced themselves they could get a better return on the money in an alternative investment. They withdrew the restricted money without court approval and bought a small fleet of trucks. Within a short time, the trucks were broken down and abandoned from Florida to California. Fortunately, we were able to recover the young man’s funds from the savings and loan, appoint a new conservator and open a new restricted account with another financial institution.

If you are a fiduciary, take your duties seriously. Be trustworthy and leave a legacy like St. Patrick. Communicate with the interested parties.  Keep good records and behave as one who must give account to a court. If you have appointed a fiduciary who is not behaving, or you are having second thoughts about a fiduciary you have appointed to act in your best interest in the future, it may be time for a change. If you change your fiduciaries, you are not changing horses in the middle of a stream, you are making an intelligent, informed decision to protect what matters most to you.