I remember very clearly in 1986 listening on the radio to an NPR interview with Ross Perot while I was driving to a noon Rotary meeting. At the time, Perot was a director and the largest individual shareholder of General Motors. The radio journalist asked, “Mr. Perot, as a director, you are entitled to a new GM vehicle every 6 months. Why are you still driving your 5-year old Oldsmobile?” Perot responded in his Texarkana twang, “When I buy something, I intend to use it.” Over the past 30 plus years I have applied that quote to a broad range of decisions. I may not remember the date and radio station correctly (it was a long time ago), but I have a vivid memory of the place, question and response. I was driving a 1985 Oldsmobile at the time. 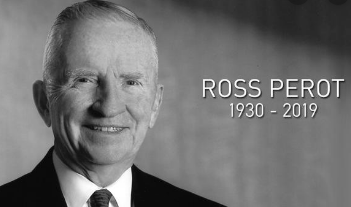 Ross Perot was from East Texas. He graduated from the Naval Academy in 1953. When he left the Navy in 1957, he worked in sales for IBM for 5 years before starting Electronic Data Systems (EDS) one of the first information technology service businesses, in 1962. EDS went public in 1968. He sold EDS to GM in 1984 for $2.55 billion. He continued to run EDS and joined the GM board for 2 years. Perot started another computer services company, Perot Systems, in 1988. He later took the company public and eventually sold it in 2009 to Dell Computer for $3.9 billion, netting $800 million.
Perot is remembered as a third-party Presidential candidate in 1992 and 1996. During his 1992 campaign, he asked “If someone as blessed as I am is not willing to clean out the barn, who will?” He was a harsh critic of U.S. foreign policy and the federal budget deficit and backed up his diagnoses with plenty of prescriptions. Running as an independent in 1992, he earned 19% of the vote. As the Reform Party nominee in 1996, he received 8 percent of the vote.
Perot died at age 89 on July 9, 2019. According to Forbes, he had a net worth of $4.1 billion. He is survived by his wife of 62 years and their five children. We expect Perot’s estate will be settled privately; little will be disclosed other than his generous charitable giving. This is not the end of the Perot story. His son, Ross Jr. is a Vanderbilt graduate and Texas real estate developer.
What is the lesson for estate planners? Many of our clients are like me, influenced by something we heard many years ago that stuck. This is why we listen to our clients tell their stories and ask questions to find out the whys behind their concerns. We love problem solving, sharing ideas and solutions that will work when you need them.
-Randy Hooper