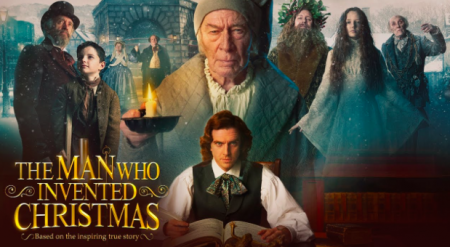 The Man Who Invented Christmas (now in theaters everywhere) tells the magical journey that led to the creation of Ebenezer Scrooge, Bob Cratchit, Tiny Tim, and other classic characters from A Christmas Carol . We hope you have time and opportunity to see it with people you love.
Charles Dickens loved Christmas. We love reading Charles Dickens tell about Christmas. So here is a selection from The Posthumous Papers of the Pickwick Clubwritten by a young and confident Dickens.
Christmas was close at hand, in all his bluff and hearty honesty; it was the season of hospitality, merriment, and open-heartedness; the old year was preparing, like an ancient philosopher, to call his friends around him, and amidst the sound of feasting and revelry to pass gently and calmly away. Gay and merry was the time, and gay and merry were . . . the numerous hearts that were gladdened by its coming.
And numerous indeed are the hearts to which Christmas brings a brief season of happiness and enjoyment. How many families, whose members have been dispersed and scattered far and wide, in the restless struggles of life, are then reunited, and meet once again in that happy state of companionship and mutual good-will, which is a source of such pure and unalloyed delight, and one so incompatible with the cares and sorrows of the world, that the religious belief of the most civilized nations, and the rude traditions of the roughest savages, alike number it among the first joys of a future
condition of existence, provided for the blest and happy! How many old recollections, and how many dormant sympathies, does Christmas time awaken!
We write these words now, many miles distant from the spot at which, year after year, we met on that day, a merry and joyous circle. Many of the hearts that throbbed so gaily then, have ceased to beat; many of the looks that shone so brightly then, have ceased to glow; the hands we grasped have grown cold; the eyes we sought have hid their luster in the grave; and yet the old house, the room, the merry voices and smiling faces, the jest, the laugh, the most minute and trivial circumstances connected with those happy meetings, crowd upon our mind at each recurrence of the season, as if the last assemblage had been but yesterday! Happy, happy Christmas, that can win us back to the delusions of our childish days; that can recall to the old man the pleasures of his youth; that can transport the sailor and the traveler, thousands of miles away, back to his own fire-side and his quiet home!
We hope this Christmas will bring peace and joy to you and yours!